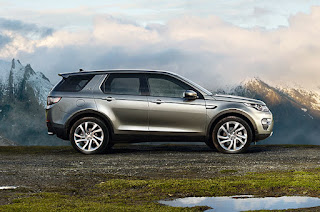 The All-New Land Rover Discovery was revealed in an incredible entrance. It's debut was made on a giant lego tower bridge, breaking a Guinness World Record for the largest LEGO structure ever built. Besides the dramatic entrance, adventurer Bear Grylls appeared from the top of the tower through an open draw bridge onto the stage next to the new Discovery.

For the finale, the Land Rover BAR team drove through 900mm- deep water under the bridge to demonstrate the Discovery's off-road capability. It's incredible entrance truly showed Land Rover's creativity and transformation to capture a vision none of us have seen before.

Emma Owen, the LEGO UK and Ireland Spokeswoman stated "We are thrilled that Jaguar Land Rover has used LEGO bricks to add some Guinness World Record-breaking creativity to the launch of the latest Discovery. This is an epic, outstanding build that absolutely captures the imagination in a way we haven't seen it before. With LEGO bricks and some imagination you really can build anything!

Watch the entire reveal of the All-New Discovery SUV here:

Schedule a test drive for one of our Land Rover vehicles and browse through our new inventory!