The Land Rover Discovery has taken on a 110-tonne road train and the Australian Outback… and won. The sight of a seven-trailer truck being pulled by an SUV sounds far-fetched – but that’s exactly what happened when Land Rover put the Discovery to the ultimate towing test. Take a look:


The extreme test was carried out using a Discovery Td6 and is the latest in a series of impressive towing demonstrations completed by the Discovery family. At its 1989 launch, the original Discovery I was used to pull a train and last year the Discovery Sport premium compact SUV towed a trio of rail carriages 85ft above the Rhine River.

The Discovery used a standard eight-speed automatic transmission and four-wheel drive system and was hooked up to the road train using a factory-fitted tow bar attachment. The road train itself was even carrying 10-tonnes of ballast in order to hit the magic 110-tonne weight mark. With 600Nm of torque, the Td6 is well suited to pulling heavy loads. 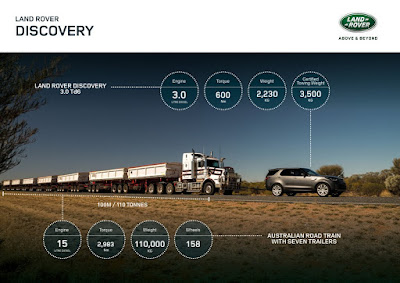